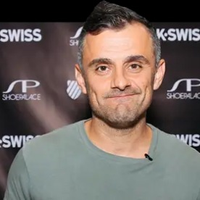 Gary Vaynerchuk is a well-known entrepreneur who is the Chairman of VaynerX, the creator and CEO of VeeFriend, and the CEO of VaynerMedia. He was a serial entrepreneur since his childhood, beginning with selling lemonade and operating an extremely successful baseball card flipping business in high school. His first adulthood business endeavour was at his family’s wine shop in New Jersey, where he apparently grew the business from $3 million to more than $60 million annually via innovative marketing strategies. Gary’s internet celebrity days began when he first published wine videos on YouTube, on Wine Library TV, a channel that has thrived into a platform for content on entrepreneurialism.

He was honoured by Shortly as a Social Good Impact Award Honoree. Vaynerchuk tweeted in December 2021, He became mindful of cryptocurrency in 2014 when Aaron Battalion, a venture capitalist, introduced him to Bitcoin. He made his first investment in ether when it was $0.06, which is now worth nearly $2,650.

He is an early investor in Facebook, Twitter, Uber, and Coinbase, known by his nickname "Gary Vee". Over the past few years, given the rise of crypto, it is probably predictable that Vaynerchuk has been walking into that space. In 2017, he first began dabbling in crypto and NFTs. More recently, in 2020, he has elevated himself into one of the industry’s greatest influencers. At present, he advises significant brands on crypto and NFTs via his consultancy business, VaynerNFT.